“This post contains affiliate links, and I will be compensated if you make a purchase after clicking on my links.”

With so many Keurig coffee makers out there it can be tough to work out the differences between them. Two similar Keurig models are the Keurig K475 vs K575 and are searched for by many people who are looking for a high-end coffee machine with multiple brew sizes and plenty of features and technology.

Differences between the Keurig K475 and K575

The 2.0 models often have improved features, but they are also designed to not be able to take any pods not manufactured by Keurig, so both of these machines require officially endorsed K-Cups in order to work, or alternatively, Keurig’s ‘My K-Cup’ reusable.

If you compare the keurig k475 and k575 in a straight shootout, the K575 would be the model we recommend, though there isn’t a huge amount of difference between this and the K475.

As well as slightly more modern features, this product is also designed to have a larger water reservoir and need filling less often.

This means you can make over 10 cups of coffee and still not have to refill the water. You can also make at least two Carafes of coffee, as the K-Carafe pods are compatible with the K575.

A nightlight feature is included, which may sound like a novelty feature, but it has multiple colors to fit the decor of your kitchen and can even illuminate your kitchen for first thing in the morning when you need that coffee to jumpstart your day.

As well as making coffee from K-Cup pods, it can dispense hot water on demand, perfect for everything from cups of tea to heating up a baby’s bottle.

A feature that many people absolutely love is the very hi-tech, extra large touchscreen control panel. This is available on both the K575 and K475.

As well as letting you control all of the different aspects of your brew, from cup sizes to strength, it also has some cool additional features like allowing you to set favorite functions, adding your own custom wallpaper and a clock function.

For flexible coffee options with an intuitive control panel, as well as a large capacity, the K575 could be well worth a second look.

Keurig’s 2.0 plus models all tend to offer a lot of hi tech functions and a huge amount of options for what you can do with your coffee, including sizes and a strength control. 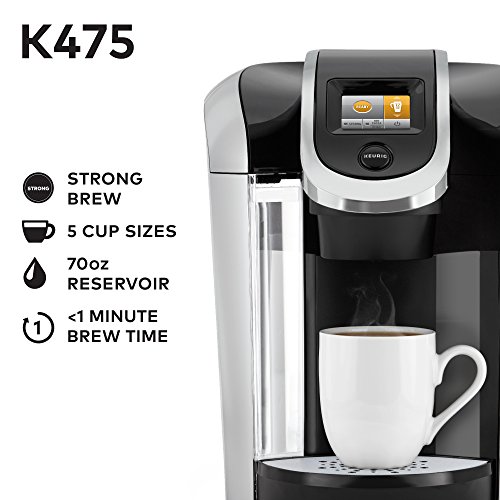 The control panel and choices are easy to get the hang of in spite of all of the functions available. Particularly brilliant is the feature of being able to set favorites so you can return to your most used settings with ease. You might also be interested in our review of the Keurig k425 and k475 models.

Many people choose the K475 for regularly making coffee for more than one. The huge amount of control and variation means you can set the strength to exactly what you and your guests want.

As you may imagine, this isn’t on the cheap end of the market. The impressive touch screen control panel is probably one of the reasons for this.

There are smaller, simpler alternatives in the range should the K475 be a bit too complex for your needs, such as the Keurig K10 or Keurig K50.

The K575’s similarities to the K475 are many, as we’ve already alluded to. In effect, the K575 is just an upgraded version of the two, which is slightly more modern. 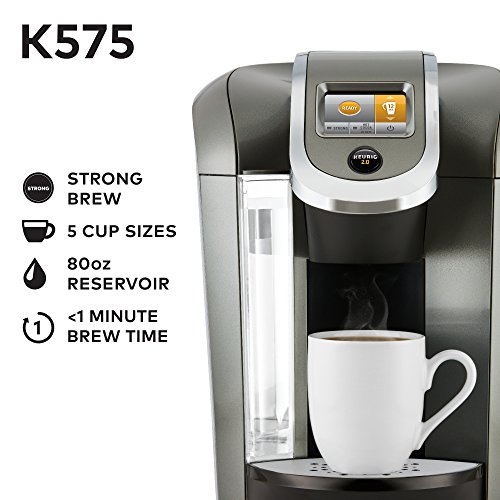 Instead of repeating all of the features of the 475, the pros and cons list below will help you to see the subtle differences between the two. Your might also be interested in our review of the k575 and the k525.

There are more similarities between these two models than there are differences. Both include a water filter, both have strength settings and favorites which you can set.

The two models take exactly the same pods including K-Cup, K-Mug and K-Carafe. The control panels are largely the same, with a few extra features on the 575., and though the 575 weighs slightly more (11.9 lbs) the two are the exact same dimensions.

Though the K575 is the superior model, there perhaps aren’t enough differences to justify a big jump in price.

If the K475 is available for less money, you won’t be making huge sacrifices if you purchase this model instead of its more recent iteration.

Both offer more than enough features for most home and office uses and leave you with a world of coffee choices at your fingertips.