Keurig’s range of coffee makers is absolutely massive, and offers products for small, single serve coffees to products like those we’re reviewing here. Lets look at the K425 vs K475, both part of the “K400 series” in Keurig’s 2.0 generation.

They’re among the larger Keurigs out there, perfect for entertaining, using in a workplace and making batches of coffee rather than individual servings (though they can both offer single cups too).


There are a lot of similarities between the K425 and K475, and in spite of the 475 being newer, there are only a few subtle differences.

Are you In a Hurry? Lets get straight to it:

Buy the Keurig 475: The choice between the two is relatively simple. The K475 wins the day simply as it comes with its own water filter, meaning that filtration becomes part of the process, and you don’t need to do it separately.

Though the K425 does have some compatible filters, these need to be purchased separately and aren’t shipped with the product when you buy it.

Filtering the water beforehand certainly seems counterproductive when you consider the massive capacity of the K475. It can hold up to 70 Oz of water, all of which can be filtered and ready to go when you hit ‘brew’.

Differences between the Keurig K425 and K475

As well as the huge capacity, the K475 has proved very popular due to its hi-tech controls.

Cool novelty features such as setting your own wallpaper are great, but this also has functional technology such as automatically detecting which pod you have put in, and adjusting the brew size accordingly.

As well as having an inbuilt feature, the K475 also comes with free variety packs for both the K-Cup and K-Carafe, a great way to experiment and see which types of coffee you like most after purchase.

The only real circumstances in which I could see the K425 being a wiser choice is if it happens to be available at a significantly lower price.

The features are similar, but I would strongly recommend adding a filtration system (also made by Keurig) once you have purchased it.

The main advantages of buying a Keurig 2.0 plus model such as the K475 are flexibility and customization.

Whereas some of the earlier or smaller models offered by the brand are a little bit limited in terms of what you can do with them and which pods are compatible, this can handle almost anything from the Keurig range. 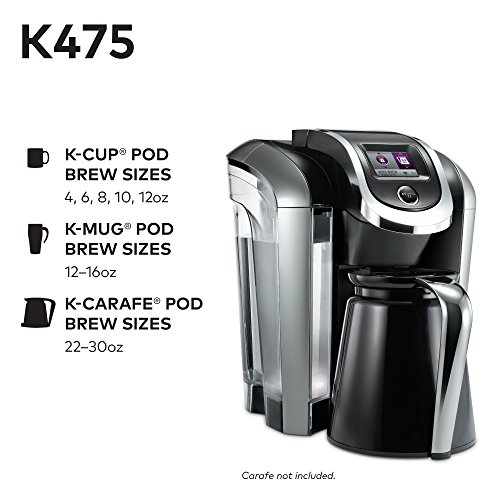 You really are confronted with a huge amount of choice from the control panel, everything from being able to customize the clock and wallpaper to choosing your brew size, temperature and strength.

You are sure to be able to get a perfect cup of coffee out of the 475. On top of that, you can turn certain settings into your ‘favorites’ meaning you can easily recall them and use again at the press of a button.

It is easy to assume that all of these controls mean that it is hard to use, but the control panel is very intuitive and clear, meaning that all of the settings are very simple and allow you to see what is going on at all times during the brew process. You might also be interested in hearing our review of the k475 to the k575. You might also find our reviews of our favorite Keurig models here.

This is a great model for you if you’re often making coffee for more than one, or want to have a huge amount of control.

It certainly isn’t on the cheap end of the market, but those extra features and exceptional build quality mean you do get value for your money.

The K425 is a little older than its ‘sibling’, the K475. In spite of not having quite as much in terms of attachments and extras, the features are still pretty great, with the same high-quality control panel and customization options. 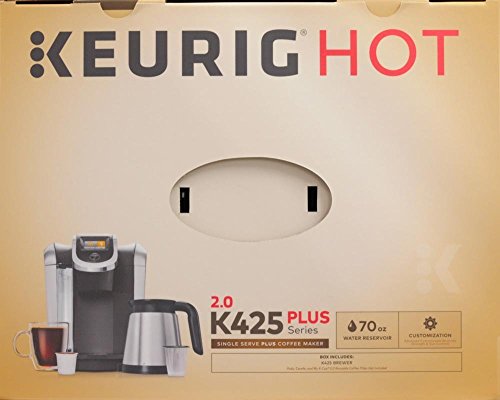 Choosing which of these two models is right for you is made tougher because they are very similar. The K425 not having a water filter included is a negative.

Even if you are able to get the 425 for cheaper, you will likely want to attach a water filter and this will cost a fair amount of money, meaning that you may be better off purchasing the K475 from the outset.

Whichever you go for, the huge amount of controls and options you have, combined with the speed and ease of use and huge capacity, means that you have one of the most flexible and reliable coffee makers on the market.

These are both great for that single serve first thing in the morning, or the big after-dinner carafe when you are entertaining company.